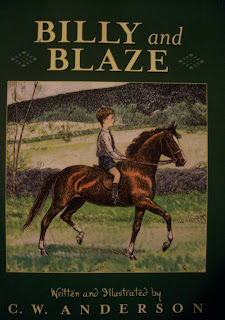 Billy loves horses, and is lucky enough to get a pony for his birthday. Together, boy and pony explore the woods, find a faithful dog and win a jumping class for Best Pony at a horse show.

C.W. Anderson's art is a favorite of most horse-crazy kids. What sums up the appeal, to me, is how soft it is. His drawings capture the liquid warmth of a horse's eyes, the gentle slope of their massive bodies; the charcoal shadings suggest the sheer bulk and physicality of horses, while the lines of ears and legs and curves of neck and tail suggest their substance. In his most action-packed illustrations there's still a hint of future peace, of the inherent laze of a large herbivore. Here, in one of his earliest books, the style is still being worked out and there are more lines, less shading, and altogether a less accomplished look. The art is good, certainly, but it doesn't yet have that distinctive touch. The dog, however, is excellent, with the touch of humor always showed in his art. 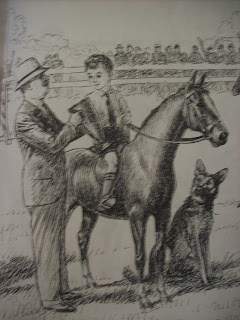