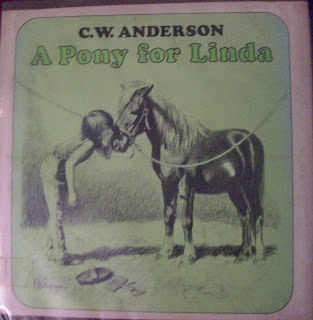 Once she had a ride on a little pony in a ring. It was a lazy, sleepy little pony, but Linda loved it. She talked about it for many days afterwards.

And here you have the reason it was possible to read 's work - filled with upper-middle-class girl children whose lives are bursting with stables and wise old grooms and racehorses and ponies - and not absolutely loathe and hate him. He made his characters burn with desire, and although their desire was always for more than we even bothered wanting - I just wanted a horse, most of his characters wanted the next Man O'War - it was impossible not to identify with the passion. And he gets little stuff right, like how much a pony ride means to a little girl who desperately wants a pony. 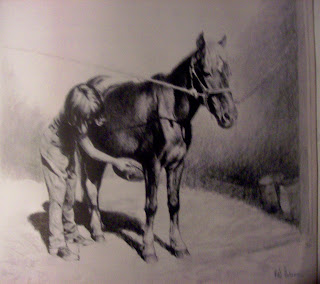 Of course, Linda has something even better - a promise from her daddy that when she turns seven, she'll get a pony. And, true to his word, he produces a little pinto pony. And Linda is a very happy little girl. As her riding improves, she attends her first horse show and makes a new friend.

Etc.
I've become fascinated by the tack in illustrations, something I never noticed as a child. Here, Daisy seems to be wearing a curb bit and a running martingale, as does the friend's pony at the horse show. Dinah, the horse belonging to Linda's mother, seems to wear a double bridle and running martingale, as does Joker, her father's horse. All wear the old-style jodhpurs with the billowing upper legs.

One of my favourite childhood picture books! Thanks for the memories.