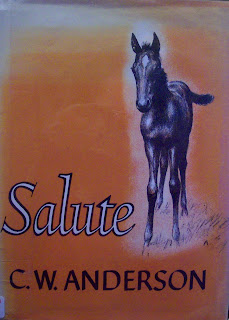 Peter is a small boy living on a farm in state when the famous racehorse War Admiral comes to nearby for a race. Peter adores Thoroughbreds, having read all the stories of Man O'War and Exterminator, and he longs to see the race. When his father takes him, he gets more than he bargained for when he becomes the owner of a broken-down racehorse. 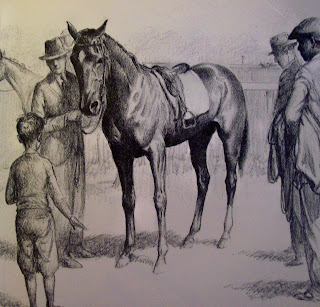 Gorgeously fantastic story where a little boy with almost no riding experience rides and rehabs a former racehorse. Lovely illustrations, dreamy story of a child's dream come true, with enough details to make it convincing. Perfectly suited to a child, with enough truth to make it attractive to an adult. For instance, the trainer who gave Peter his horse tells him

Don't ever sell an old horse that is no longer useful to you. If you do, you may someday see a horse who has run his heart out for you pulling a junk wagon. A thoroughbred is as proud as a man - prouder, maybe, and don't think his heart can't break.... if you can't afford to put an old campaigner out to pasture the rest of his life, then you must put him away as mercifully as possible - or else do what I did with Mohawk (ie, he gave him to the boy).

Other Books
Bobcat
High Courage
The Horse of Hurricane Hill
Afraid To Ride
Phantom, Son Of The Gray Ghost
A Filly For Joan
Great Heart
Another Man O'War
The Outlaw

PS: NBC will broadcast their one-hour coverage of the Rolex **** on Saturday, May 16 at 3:30. It was originally supposed to air today, but their hockey coverage ran over. The Preakness Stakes coverage will begin that same day on NBC at 5pm, post time 6:15pm.