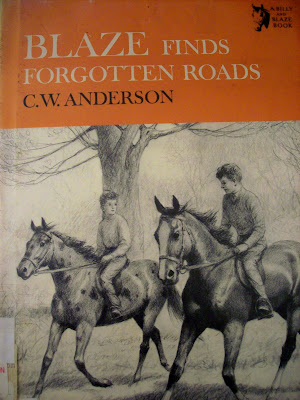 Billy and Tommy go riding on their ponies Blaze and Dusty, and explore the woods by making every right turn. They quickly become lost, find a ruined cabin, jump a wide stream and picnic by a waterfall. 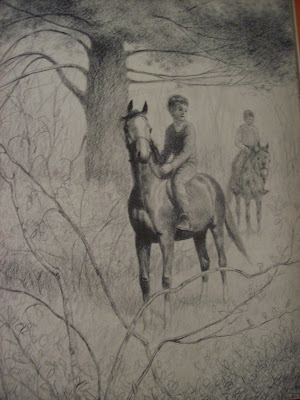 Unusual for the Blaze series in that much of it takes place in thick woods, with the boys ducking to avoid branches, etc. Unusual for , too, whose drawings usually portray riders using grassy lanes with the occasional low stone wall. I could swear Blaze and Dusty grow taller in this one. There's one drawing where Blaze looks very much like a horse, and Dusty looks leggier than previously. Quibbles, all. These are some of the most engaging drawings in the series, with both children and horses looking interestedly around as they scout new territory.

Blaze - bay pony with four socks and a blaze

Great listing of the books in the series. Helped me deconflict titles a bit.