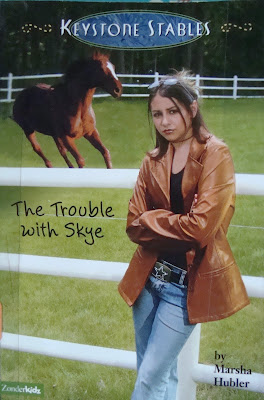 The Trouble With Skye (aka A Horse To Love)
Series: Keystone Stables (#1)
Marsha Hubler
2004, Zonderkidz

"God made a horse's mouth very sensitive. It doesn't take much to stop him with that bit in his mouth, so be careful. Did you know it tells us in the Bible that a tiny bit controls a powerful horse like this one? God's Word has wisdom for every facet of life, even how to handle God's creatures."
What is he talking about? Skye asked herself. The Bible? What does that have to do with horses?

13-year-old Skye Nicholson is a jaded foster kid who's been through 13 homes and a long list of tangles with the juvenile court system. Her latest trick, throwing a soda at a classmate and setting fire to her books, has earned her a one-way ticket to the local juvenile lockup, but she's re-routed by Christian foster parents Eileen and Tom Chambers, who also run a special needs camp. Skye is less than impressed with the God talk, but falls head over heels for their Quarter Horse, Champ.

She released her hand from the horn, reaching cautiously toward Champ's neck. Gently, Skye crawled her fingers under his thick, flowing mane and stroked his coat, which was warm from the rays of the sun - as warm as her not-so-nasty heart. She took a deep breath and smiled.

But of course, just learning to love and ride horses - which Skye does with the typical ease of a series heroine - isn't enough. Skye's problems are at school, where she can't resist once again assaulting her unfortunate classmate Hannah, and at the counseling sessions at Maranatha Treatment Center, and at her new foster home. Rules irk her. Hannah irks her. Life irks her. And when things irk Skye, she feels free to flip out and start punching people. She's not a tremendously likeable heroine.

The religious message is consistent and forceful, but well-integrated into the plot. A child could read it simply as a horse story, as the religious tone is not clunky. As an adult, it's hard to avoid seeing the very Christian-of-a-certain-type themes and beliefs in the plot of a black sheep reclaimed, and particularly in the indifference of the main characters to the effects of Skye's actions on others. As long as poor little Skye learned to trust and love, that's the only important thing.

The writing is better than that of most series, though the quality is not consistent. The strong characters and brisk plot make this an appealing series book, which would have benefited from better editing, and tightening up language that is sometimes weak or clumsy.

There isn't much horse in this horse story. Champ is very much background, despite Skye's affection for him and the part he plays in the plot.

The first few books of the series have been reissued with new titles and covers. This installment's new title is A Horse To Love and the cover is of a horse running (see here). An improvement over the sulky teen model on the original cover. According to the author's website, the new editions feature chapters in the back about horses and horse care.


Note:
The first quote references James 3:3
Indeed, we put bits in horses’ mouths that they may obey us, and we turn their whole body

1 My brethren, be not many masters, knowing that we shall receive the greater condemnation. 2 For in many things we offend all. If any man offend not in word, the same is a perfect man, and able also to bridle the whole body. 3 Behold, we put bits in the horses' mouths, that they may obey us; and we turn about their whole body. 4 Behold also the ships, which though they be so great, and are driven of fierce winds, yet are they turned about with a very small helm, whithersoever the governor listeth. 5 Even so the tongue is a little member, and boasteth great things. Behold, how great a matter a little fire kindleth! 6 And the tongue is a fire, a world of iniquity: so is the tongue among our members, that it defileth the whole body, and setteth on fire the course of nature; and it is set on fire of hell. 7 For every kind of beasts, and of birds, and of serpents, and of things in the sea, is tamed, and hath been tamed of mankind: 8 But the tongue can no man tame; it is an unruly evil, full of deadly poison. 9 Therewith bless we God, even the Father; and therewith curse we men, which are made after the similitude of God. 10 Out of the same mouth proceedeth blessing and cursing. My brethren, these things ought not so to be. 11 Doth a fountain send forth at the same place sweet water and bitter? 12 Can the fig tree, my brethren, bear olive berries? either a vine, figs? so can no fountain both yield salt water and fresh. 13 Who is a wise man and endued with knowledge among you? let him shew out of a good conversation his works with meekness of wisdom. 14 But if ye have bitter envying and strife in your hearts, glory not, and lie not against the truth. 15 This wisdom descendeth not from above, but is earthly, sensual, devilish. 16 For where envying and strife is, there is confusion and every evil work. 17 But the wisdom that is from above is first pure, then peaceable, gentle, and easy to be intreated, full of mercy and good fruits, without partiality, and without hypocrisy. 18 And the fruit of righteousness is sown in peace of them that make peace.
Biblegateway

Note: This is a very modern book to have a reference to Tippecanoe and Tyler Too! This old slogan goes back to the 1840 presidential election, and a campaign song celebrating William Henry Harrison and his vice-presidential candidate, John Tyler. The Tippecanoe was a river near the 1811 battle in which Harrison had led the Indiana Territory settlers against a Native American uprising. The settlers won, Tecumseh's forces never recovered, and Harrison used it in his presidential bid 29 years later. He won the election, but 22 days after his inauguration, he came down with a cold. With the limited medicine of the time, the relentless pressures of office and no time to rest, his cold turned into pneumonia. Nine days later, he died, and is still the president with the briefest tenure.

Just had to mention it, as I've seen the Tippy/Tyler duos in older books, ones from the first half of the 20th century, but didn't think I'd see it in a book from 2004.

Links
Author website
Zonderkidz
Posted by Sarah at 11:24 AM