It's been an odd little winter so far.  Unlike the past 3 years, it's been mild (notwithstanding an ice storm on Halloween, that is...) and really only one snowfall in 2012.  And it was 60 today, a morning to startle you awake when you blow out the door late for work and having to walk the dog first and discover - warmth.  No coat, no hat, no gloves, no mittens warmth.

This time last week it was much different.  The sky that's a lovely if windy blue tonight was white last Friday night, snow clouds obscuring everything.  And we woke on Saturday to a perfect white snowfall that was turning quickly to a freezing drizzle, coating the inch of snow with a hard, slick crust.  The dog did not appreciate this, as she had to break through with every step, and our walk was extremely slow.  I was estatic.  I'm torn, on most weekends, between blissful sloth and the nagging urge I should be GETTING MORE DONE, and inclement weather relieves me of that burden; I couldn't go Out, it was Snowing.  So there.

I spent most of the weekend hanging at the window, watching the birds at the bird feeder.  Even the cardinals, who have been largely indifferent to the feeders since kicking junior out of the nest (they spent much of the late summer patiently flying from feeder to teen cardinal, stuffing seeds into him) reappeared.  Dog and family both became inured to squawks like "The nuthatches!  The nuthatches!" and "Wrens!  There were wrens!"  The dog is only interested in the feeders as far as I sometimes throw stale bread out there, and the family was only briefly interested when I happily announced that a hawk had just come by (and missed), executing a hairpin turn directly in front of the window.  That hawk and I seem bound on a collision course; he blew by me by a few feet last week, having apparently mistaken a bit of dog fur I was sweeping off the sidewalk for something tasty. 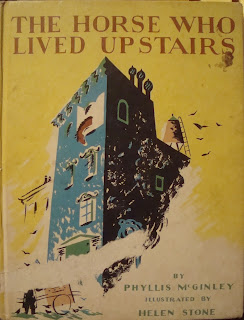 There was once a horse named Joey who was discontented.

A city horse, Joey lives in a highrise, drinks from an old bathtub, pulls a vegetable cart and longs for the country life.

"This is no life for a horse," he used to say to the Percheron who lived in the next stall to him.  "We city horses don't know what real living is.  I want to the move to the country and sleep in a red barn with a weathervane on top, and kick up my heels in a green meadow." 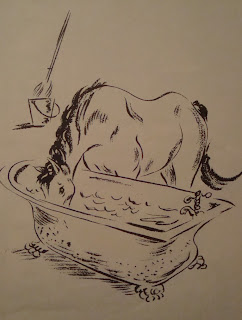 But when Joey gets his chance at a rural idyll, he learns that there are unexpected drawbacks, and that he may just be a city horse at heart. 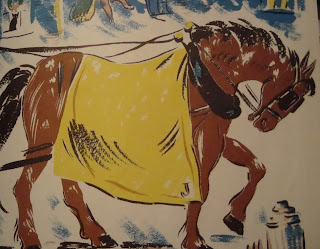 A wonderful pairing of energetic illustration and wistful writing, and that eternal favorite them of where home is.  My beloved old copy appears above, which explains the various blots and scratches.  It's on the fragile side.  I remember reading this book as a child and being utterly captivated by the fact there were horses living in a building.  Neat!  And, of course, the city itself was fascinating.  All those old children's books where New York was the star, all tantalizing.

Other Books (childrens')
The Horse Who Had His Picture In The Paper - sequel (wheee! I didn't realize this existed)
The Plain Princess
The Most Wonderful Doll In The World


About the Author
1905-1978
A poet who wrote children's stories and articles about gardening, a Pulitzer Prize winner who lived happily in the suburbs, and a feminist whose affection for a traditional persona vexed roughly the same percentage of people as it pleased, McGinley seems to have enjoyed herself thoroughly.  Several sources mention a childhood spent on the move, often in less-than-cushy rural circumstances, and that would seem to illuminate the presentation of a less-than-idyllic country life in this book.

About the Illustrator
1903-1978?
I didn't find much about Helen Stone, only a snippet on Google Books from Something About The Author, indicating that she was a friend of McGinley's who brought over some horse drawings one day, as inspiration for a poem. She was, however, an art school graduate who'd studied in Paris, although it seems that this was her first book.