Well, it's been a while.  Four years.  I was busy.  Still am busy.  I let this blog dwindle because I didn't have time for the sort of entries I used to make.  Still don't.  But - I have time to make some entries.  The perfect is the enemy of the good.  So here we go. 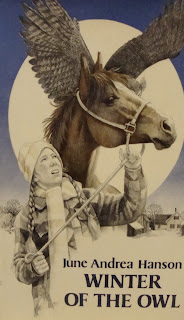 
He whinnied softly and stepped forward, so he stood between us and the mares. In the darkness of the shed, the white-lightning blaze which shot down his face seemed luminous, radiant. He was alive with magnificent power, so like the stallion. I stood quite still before him.

Janey’s household is filled with tension; her father, struggling to cope post-heart attack with his newly purchased ranch, clashes constantly with her old-school grandfather, whose experience ranching is offset by his own declining health.  In a Montana snowscape at Christmas, the hiring of a Cheyenne hand and his son anger the elderly grandfather even more – and the decision to sell Janey’s adored colt, Fire Dancer, turns the already moody teenager into another source of stress.

Frankly, I’m surprised anyone is still alive at the end of this book.  One recovering heart patient, two senior citizens who are still trying to do full-time ranch work, a teenaged girl erupting in rage, a remote ranch…   It seems more like a suspense novel than a horse book. Or, rather, a teen coming of age novel about learning to deal with angry adults and cute boys who totally swoop in and steal your horse's affections.

This is a sequel to 1979’s Summer of the Stallion (the stallion mentioned in the quote above).  Hanson grew up on a ranch, attended the University of Colorado and ended up in first the Peace Corps and then New York City.

Other books
Summer of the Stallion (1979)